For example, Pai Gow once started as a game with dominoes, but today the familiar game cards are used.

In order to explain the rules of Pai Gow Poker as effectively as possible, we will use the playing card version of the card game. You play with a standard deck of 52 cards and a Joker. A maximum of six players and a dealer can participate in each game, as all players receive a total of seven cards.

If you want to experience the original game, the one with dominoes, you should visit Chinese casinos. Since Pai Gow is virtually unknown in European casinos, we cannot play it anywhere with the standard game cards. What are the rules of the game that belong to Pai Gow?

Normally all participants play against the bank. All seven players receive their seven cards face down, so that they can decide which combinations work out best. This is where the game begins, so you as the player must make two combinations. [/box]

Pai Gow Poker is also called two-handed poker, because you have to make two hands out of seven cards. This means that you make one hand with five cards and one hand with two cards. The five-card hand, of course, gives you the most options, as it allows you to make a flush or a straight, for example. The rule is that your five-card combination must always be higher than your two-card combination. For example, in the five-card hand you can make a Pair 9, while in the two-card hand you can play a Pair 4 as the maximum combination. Each player places these hands upside down on the table and waits for the dealer. 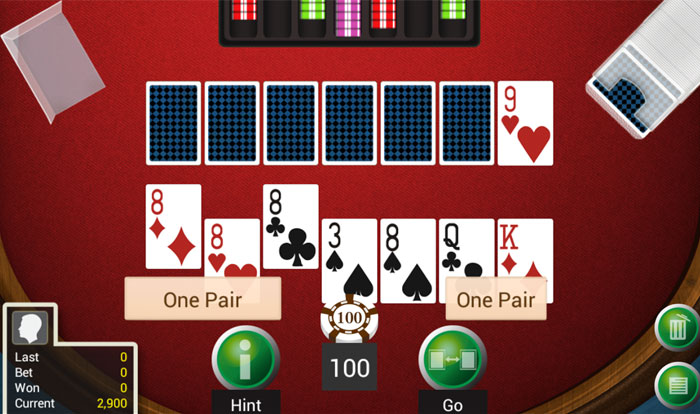 Rules of play of Pai Gow

So the dealer too has been given seven cards, with which he, like the other players, must make two hands as good as possible. The dealer is then given the opportunity to be the first to show his best combinations. As a player at the table, you can immediately see where you stand. There is no doubler, so you have to make do with the profit over your bet and also a 5% commission to the bank. After the dealer has shown his two best combinations, the other players follow.

How are winnings determined?

The Ace is one of the unique components of Pai Gow. If you want to make a straight with the Ace, you can do so in the same way we are used to, namely with A-2-3-4-5 or 10-Beer-Mother Ace. However, the 10-Beer-Mother Ace combination is not always the highest possible street in Pai Gow. In the Ace-2-3-4-5, the Ace is the highest card and always wins over a 10-Boer-Vrouw-Heer-Aas street.

This is a big difference from the Dutch counting of streets, so be well aware of this before you get confused.

Last, but no least; The Joker. Earlier we mentioned that the game Pai Gow features only one Joker. This is the actual special card, because it has a different meaning than in our card structure. The Joker can only be used as an Ace or to complete a straight or flush. You may not decide what value the Joker has, for example to create a Pair Ace with one Ace.