Mahjong is a game where insight, tactics and luck play an important role. It is an addictive game and those who have played it once will always want to continue playing this mysterious game.

Mahjong is played with plastic stones that can make a hell of a racket when shaken.

The game of Mahjong

In Asia it is one of the most popular games and in China, Japan or Korea almost every adult plays it. In the 1920s it was also a craze in Europe. In the Netherlands it is still played on a limited basis at home. However, the Netherlands also has a Mahjong league. 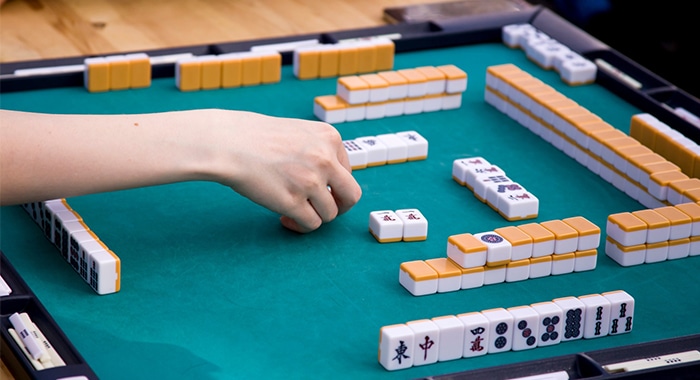 Mahjong looks complicated
The game can be played according to many different rules. The aim is to make a combination of the 14 tiles in front of you as quickly as possible. Just like in poker, these combinations consist of sets of the same tiles and tiles with successive values. Of course, in Mahjong it’s not called a set. We are going to teach you the names as well.

The game has 136 stones, two dice and sticks on which the stones are placed. There are also cards for the four cardinal directions. Some games also include chits for settling with each other.

The Mahjong tiles that can be compared with hearts and spades are bamboo, circles and Chinese characters. All tiles range from 1 to 9. 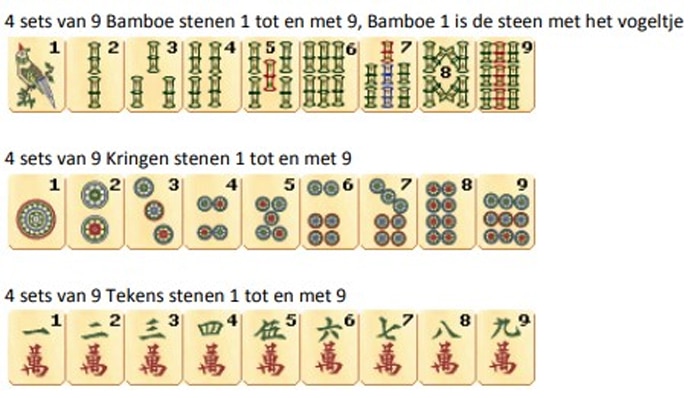 Sets of 4 and 3 tiles in Mahjong

These Winds and Dragons are trump stones and are worth more. The same is true of the 1st and 9th stones of the Bamboo, Circles and Chinese Signs. These stones are called gemstones. The 2 through the 8 of the three series are the simple stones.

In most variants of Mahjong, there are also 8 bonus stones. If you possess these, you can place them outside and get a new tile from the wall. In total you should always keep 14 stones. If you discard one, you get 13 again. When it’s your turn, take the 14th tile and you may be out.

If you complete all 14 tiles, i.e. 4 sets and a pair, you will receive an additional bonus in the form of bonus points for the bonus tiles. These tiles are 4 flowers and 4 seasons. 1 flower or a season gives you extra points.

All tiles are placed face down on the table and “washed”. This washing or shaking always makes a lot of noise. Now the players will make a wall 17 stones long and 2 high.

Now it is determined who represents which wind direction. Each player rolls the dice once and the highest roll becomes the East Wind, the leading wind direction. The second number of points becomes the South wind and sits to the right of East, then West and North.

If East throws his dice 14, he starts counting with himself and eventually ends up with South. South then counts from the right side of the wall 14 stones and breaks the wall there. These 14 stones are the dead wall. Players take 3 x 4 tiles and 1 tile each from the living wall until all players have 13 tiles. East must start and may take 1 additional tile.

We can start playing now but we will explain the names of the sets you can make.

These are 3 consecutive tiles. For example 2,3,4 from the Bamboo. You can only make a chow with a tile thrown by the player before you or with a tile from the wall. If you take it from your predecessor, the chow must be revealed.

These are three identical tiles. You may make them with a tile discarded by someone else (does not have to be the player in front of you) or with a tile from the wall. If you pick up a discarded tile, the pung must be revealed.

If you already have three of the same tiles uncovered, you may add a fourth tile after removing it from the wall. You must then take an additional tile.

This is a pair consisting of two identical tiles.

As said, everyone tries to make sets. You win if you have 4 sets of 3 tiles and 1 pair.

East has 14 tiles and discards one. The next player may always take that tile if he can make a chow with it. All players may take the tile if it can be used to make a pung. If someone takes a discarded tile, the next player takes his turn.

If you make a combination with a tile from the wall, you may leave it inside. Close so your opponents do not see this.

Eventually you play through until a player has 4 combinations of 3 stones and a pair. If you are waiting for 1 tile, you may take any discarded tile. Even if you only make a pair or chow with it.

If you are out, you have won mahjong and your opponents must pay you. How much they have to pay depends on the strength of your combination and the number of Flowers and Seasons you have.

The payouts are very complicated for a beginner. If an experienced player is present, he can quickly calculate the payouts and explain them to you. After a while you’ll get the logic.

We recommend that you consult the rules of the game. There are different ways to count the points. We will explain the order of importance of the combinations.

Then you can have numerous doubles. Count the combinations with the above count and double again if you have stones from the diagram below. So you can have multiple doubles. Flowers and Seasons are also worth 4 points but these tiles are not in every Mahjong game. If you have your own flower or season then this is also a double. Note that the player who is East always receives and pays double.