How a slot machine works

Many people think that the principle of a slot machine is nice and simple. After all, you pull a lever or press a button, and the reels start spinning and you either win or lose your money.

This sounds very simple indeed, but there are certainly important factors to take into account. Especially if you plan to spend a few hours of your time and money playing a slot machine. After all, behind the simple mechanism of a slot machine there is a complex mathematical world.

Modern slot machines all work on the basis of software and computer programs. What you see is just to make it all look a little nicer. In fact, before you even see the results on the reels, the software already knows whether you’re going to win or not. This is decided the moment you press the start button or pull the handle.

Each time you press the start button, a piece of software called the Random Number Generator (RNG) generates a number of numbers that indicate whether the spin will result in a win or a loss. This process is completely random and each time you spin the reels, another unique combination of new numbers is formed.

To verify the integrity of RNG systems, software vendors and online casinos must pass both government inspections and audits. Slot machines are the ultimate game of chance because everything is random and there is nothing you can do to get around that.

This in turn means that anything can happen. You can get lots of winning spins in a row, but also not see any significant win appear on your screen for a long time, which can be quite frustrating.

Casinos and game developers are also required to ensure that the outcomes on a slot machine are completely random. Thus, no algorithm may be used that gives a top prize on the thousandth spin, for example.

We go into more detail about the RNG

There are two types of RNGs. One uses an algorithm, the other does not. Casinos use the RNGs where no algorithm is used. After all, were they to use an RNG with an algorithm, one would theoretically be able to predict certain prizes.

The symbols on the slot machine actually have no value at all. They are only linked to the numbers selected by the RNG (Random Number Generator). The series of numbers then determines, based on the settings in the slot machine, whether a prize will be given and, if so, how much that prize will be.

With the RNG, hundreds of numbers are selected at random, one after the other, without any stops. This happens at lightning speed and the outcome is already determined when a player presses the start button.

Symbols in slots are generally divided into two categories: basic symbols and special symbols. The basic type is easy to recognize and has no interesting features. You just need to have several of them in a row to win a small prize. They come in different levels, with some symbols yielding more than others. 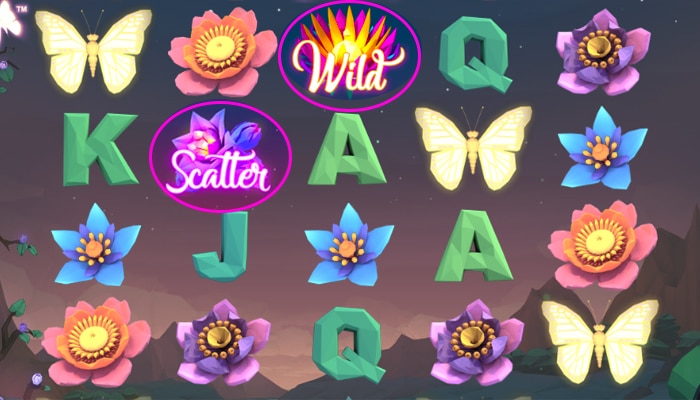 The low symbols appear on your screen most often, while more expensive symbols will fall less often. Usually the lower symbols can be identified by the card symbols: 10, J, Q, K, A.

The special category of symbols is designed to boost the player experience and make the gameplay even more appealing. There are generally three symbols in this category: the Wild, the Scatter and the Bonus symbol.

The Wild symbol can replace any base symbol if needed, allowing you to create winning combinations. The scatter and the bonus symbol have the same purpose, which is to start an additional bonus round of free spins.

The paylines on a slot machine

A payline refers to the combination of symbols you can form when playing on a slot machine. In older slots, a payline was formed as a straight horizontal line in the center of the reels. Nowadays, paylines can be just about any shape you want, with several zigzag lines scattered throughout the reels. Because many slots also have more reels, there are often many more paylines possible on these games than when a slot has only three reels.

Classic slots have 1 to 3 paylines, while modern video slots average between 25 and 50 paylines. For each payline you activate, you also have to increase your bet by a certain amount. While this increases your chances of forming winning combinations, it also increases the risk of playing because you are betting more money. The best choice, despite that fact, is to always play with the maximum number of paylines.

The direction in which the symbols line up is also important. The vast majority of slots only reward you if your combination starts on the leftmost reel and continues along adjacent reels on an active payline. In only a small number of slots are winning combinations made not only from left to right, but also vice versa. Scatter symbols are traditionally unaffected by the direction in which they are formed, as long as they are on the playing field.

We’ll close with perhaps two of the most important factors to consider when playing on a slot machine, namely the house edge and the Return To Player (RTP) percentage. These are essential for you to understand how fair a game really is and whether it is worth playing in the long run.

Slot machines often have the highest house edge. In land casinos this can be up to 30% and in online casinos it is between 2% and 8%. The house edge is the total amount the casino is allowed to keep as profit in the long run.

In a game with a 5% house edge, 95% of all the money that comes in through the slot will be paid back to players in the form of winning combinations. This hypothetical 95% is the RTP percentage. The remaining 5% is retained as profit for the house, hence the term house edge.

This is also the biggest disadvantage of slot machines. Playing slot machines is, compared to playing other casino games, a very expensive affair. Gambling is meant to entertain you, but remember that it is always a game of chance and the outcome is entirely based on chance. Make sure you keep playing responsibly, and playing will remain fun!

The number of different variations is not as large as with blackjack or roulette. Slot machines are certainly a diverse genre, although this diversity comes about through a variety of themes and aesthetics rather than drastic changes in gameplay.

Classic slots, meanwhile, are a sub-genre of slots that try to mimic the look and feel of old school fruit machines. They have 3 reels and usually come with up to 3 paylines, although this is not an absolute requirement.

The gameplay is quite simple, making them perfect for players who are new to the world of slots. There is little special about these games, nor is the game developed around a special theme.

The symbols are usually in the style of the old machines, with cherries, sevens, jokers and diamonds adorning the reels. Some games include Wild symbols in the mix, making it easier to form winning combinations.

Video slots are the most common type of slot you will find in the modern casino. They are much more complex than the classic slots of yesteryear and offer a more exciting and unpredictable gaming experience. While classic slots usually offer basic gameplay, video slots tend to use more features to make the game entertaining. You have free spins rounds, bonus mini games, more symbols – both standard and special – and can usually play on many more paylines than the average slot.

Video slots are almost always developed around a specific theme. With traditional slots, at most some graphics and a few basic symbols in the same vein are used to dress it up a bit. With video slots, developers have gone out of their way to make it a complete entity, including special effects.

Unlike standard jackpots on non-progressive slots, the jackpot amount increases until the jackpot is won. So there is no limit to the amount you can win. Once the jackpot is won it starts again from a minimum amount. Progressive jackpots are offered by the software provider and not by the casino and this has some important consequences.

Firstly, the size of a jackpot is determined based on all players playing the same game, regardless of which casino they play at. A small percentage of each bet on the game in all online casinos that offer it is added to the jackpot.

As you can imagine, this can cause the jackpot to rise to incredible values, especially on the more popular slots. However, the downside of playing on a progressive slot is that you have to choose the highest bet to have a chance of winning the jackpot.

Slot machines continue to work like a magnet on casino visitors. Not surprisingly, because the lights, sounds and special effects not only draw you to a slot machine, as it were, but also make you play it longer.

That’s no problem at all, since you have the chance to win some nice amounts. But remember that winning at a slot machine is pure luck. You can’t use a strategy and there are no algorithms to discover. Knowing how a slot machine works might persuade you to choose to play other casino games. And that might be the best choice you can make, because on many other games, with a little skill and knowledge, you can set your odds a little better yourself.