Sic Bo is less well-known to the general public in the Netherlands and other Western countries. Sic Bo was for many years available at Holland Casino, but unfortunately it was withdrawn from the game’s range a few years ago. However, the history of the game goes back much further than just today. Here you can read more about the history and origins of Sic Bo.

Sic Bo officially originates from the giant country of China. According to its inhabitants, the game dates back hundreds, if not thousands, of years. In any case, it is known that playing dice was one of the first forms of entertainment, reminiscent of today’s casino.

In that respect, Sic Bo could be a precursor of casino games like craps or games like roulette. Sic Bo’s betting options are very similar to those found in roulette, such as betting higher or lower than a given number. 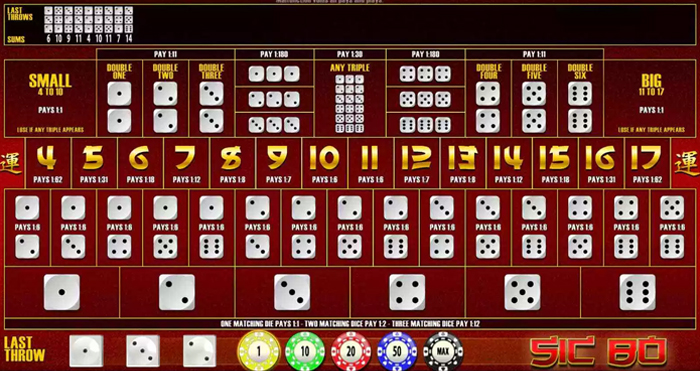 There are no hard dates about the exact year Sic Bo was invented. However, the story goes that Sic Bo was first played with a colored brick, which had six sides, just like the dice. After some time the bricks were exchanged for smaller ones, which eventually turned into dice. These dice were of course much easier to use and the speed of the game improved considerably.

The three dice one started playing with were thrown on a porcelain surface. The moment the dice came down, they were covered with a bowl or lid, so the dice were not visible until the moment they were actually stationary. Then the bowl or lid was removed and so one could see the outcome of the game. These were the first Sic Bo game rules. Those who know the dice game Yahtzee no doubt know what that process looks like.

The expansion of Sic Bo

Asian countries have long been very protective of their culture and customs. For this very reason, Sic Bo has long been a relatively unknown game in the Western world. Since the growth of tourism of many Chinese people towards Europe and America, the growth of Sic Bo in this environment has also grown significantly. In the United States, the major land-based casinos have also introduced the game. Although not everyone is familiar with the game Sic Bo yet, it does have the potential to be ‘high profile’ in the global casinos.

The board of Sic Bo is one of the most eye-catching elements of the casino game. Multiple colors are used in order to make the various options very clear. Sic Bo’s chances of winning are often relatively high, depending on the choices you make on the board. When you play Sic Bo, you’ll see this full board in front of you. If you want to explore the game without any risks, we recommend you to try out the free versions of the game first, because there are plenty of them around.

If you visit an offline casino, the table is fully automated, with its own shuffling machine and lights up when one of the chosen gambling options has fallen.

With centuries of history in Asia, Sic Bo, Tai Sai or Dai Siu is an interesting game.