High Streak Blackjack goes by the regular rules of Blackjack . Players can also play the High Streak sidebet, which allows them to win big in addition to the original bet. 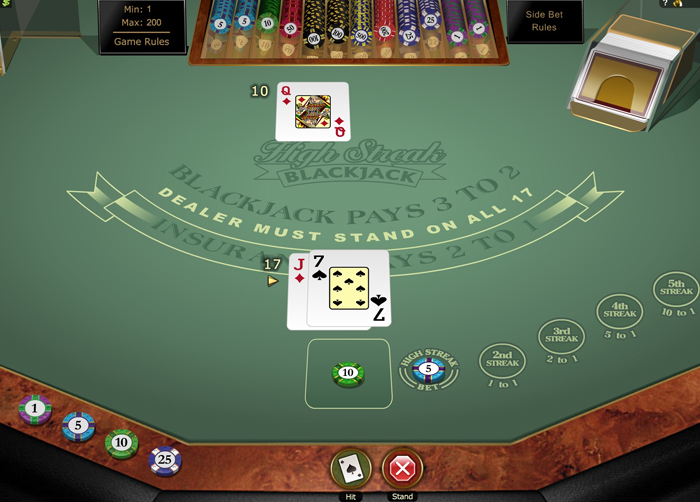 This sidebet is the main game rule why this game is so popular.

In case of a draw you get your side bet back. You have to bet again on the side bet the next round and start winning again. The longer you win in a row, the higher the payout. But also the chance of losing a round and losing your winning streak as well, along with your side bet goes up.

For example, after six winning rounds, you can win back ten times your original sidebet bet, plus your stake for each round won. This chance of high winnings makes High Streak Blackjack a popular variant of the traditional card game.

In High Streak Blackjack, it is especially important to know when to bet the sidebet. Although counting cards is a common strategy in Blackjack and other casino games, this is difficult to do in High Streak Blackjack, since the game reshuffles the cards after each round. Moreover, this game can only be played online for the time being, where the cards are played much more randomly. So with this version of the game, players tend to look more at how many rounds are lost before playing a High Streak sidebet.

The reason behind this is that the law of averages should ensure that the player wins some rounds after losing some rounds. This is a tricky theory, since it is never certain how many rounds will be lost before the average is reinstated, but it is often used as a strategy. For other players, it is simply a matter of placing as many sidebets as possible, and hoping that a winning streak will emerge.