It was all exciting for the fans of online gambling in the Netherlands on October 1, 2021. By now it was known which casinos had received a Dutch license. Fairplay casino was one of the ten lucky ones. Everyone was looking forward to the launch of the website.

The enthusiasts were all deceived on October 1. Huge problems with CRUKS prevented a casino from coming online. Meanwhile, a few days have passed and there are now 6 casinos online that have a Dutch license. Number six is Fair Play Casino.

They had hoped for something different. At the end of September, at the same time as the major trade fair IGB in Amsterdam, the management of Fair Play was told that they were one of the ten casinos that would be licensed in the Netherlands on October 1. The champagne was uncorked immediately. Yet it all turned out differently. The launch was hampered by all kinds of technical problems that the company itself could not do anything about. 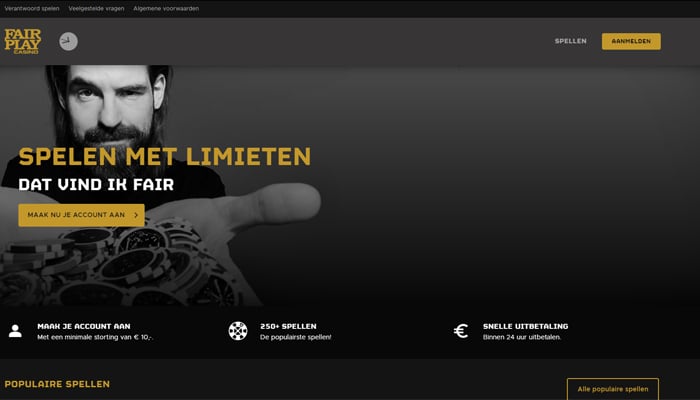 Fair Play is now online
Fortunately, everything has now been resolved. Since October 8, people can register and play at fairplaycasino.nl. After TOTO, GGPoker, BetCity.nl, Holland Casino Online and Batavia Casino, players now have a sixth alternative to gamble legally online.

Fair Play as a land-based casino

Fair Play is no stranger to the gambling world. For over 35 years, they have been running land-based casinos/play halls throughout the Netherlands. There are 38 branches of this well-known Dutch arcade. This of course gives Fair Play a certain amount of name recognition. It is expected that many players who regularly play in one of the land-based casinos will also check out Fair Play’s online casino.

These casinos have a Dutch license

What we think of the online casino

Of course we also checked out fairplaycasino.com. The site is dark in color, unlike many other online casinos. Most want to stand out with lots of bright colors. Fair Play has clearly chosen a different image. With gold and gray they emphasize a chic look. We had some problems registering, it’s a fairly long process, but eventually we succeeded. The number of casino games is rather limited for an online casino. Where some international online casinos have thousands of games Fairplaycasino.co.uk has only 328 games. The expectation is that they will soon expand this. Because of the very strict and complex licensing requirements, they have chosen to start with a small arsenal of games.

Fortunately, though, most games are represented and they have brought in some good providers. The live casino has games from Evolution and Pragmatic Play. That’s already super cool. Evolution is the creator of very popular live casino games like Crazy Time and Lightning Roulette.