In need of an extra challenge? Play Blackjack Pro

The game is played with four decks of cards, excluding jokers. In this game you can play with more than one hand against the dealer, namely with up to three hands at the same time. This way bigger profits can be made, although of course the opposite can also be true. In addition, Blackjack Pro allows you to play multiple sidebets, which can significantly increase your winnings.

A sidebet is an additional bet that is less than, but never more than, the original bet. These bonus games are of course not mandatory, but they can increase your chances of winning.

One of the sidebets you can play at Blackjack Pro is called Perfect Pairs, or perfect pairs. As with other sidebets, this bonus game allows you to bet less but never more than the original amount. You win this bonus game if the first two cards dealt in your hand are a pair. There are three types of pairs with which you can win. The highest win can be achieved with a perfect pair. This is a pair of the same suit, for example two kings of clubs.

25 times your stake in a “perfect pair”!

A perfect pair doubles your bet by 25 times. A colored pair is a pair of a different color, but both red or both black, for example a queen of hearts and a queen of diamonds. On this outcome your bet is doubled 12 times. Any other pair, meaning a pair of the same cards but of different suits, such as a jack of spades and a jack of hearts, wins you six times your original bet. Like the Double Jacks bonus game, this game is also played and paid out before the actual game round begins.

Like the previous bonus game, this game is also a sidebet, where you can bet extra up to a maximum of your original bet. In this bonus game, you win if the first two cards dealt in your hand match the dealer’s card in a specific way. There are five ways in which you can make an extra profit in this bonus game. 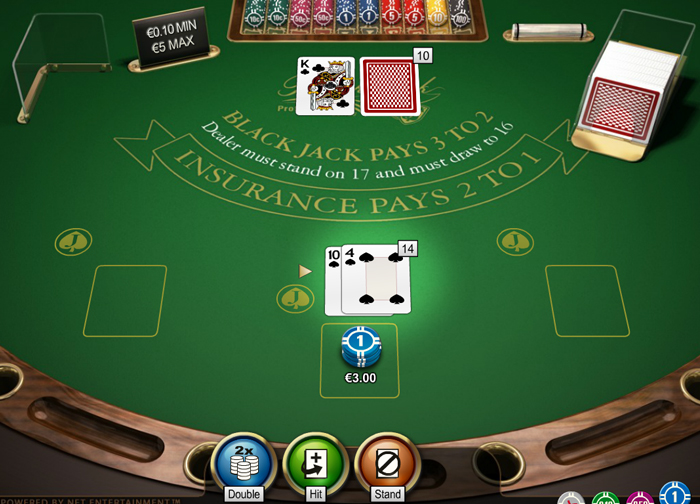 One of the biggest differences between Blackjack and Blackjack Pro at an online casino is that in the Pro variant you can win extra with a jack in your hand. The Dutch translation of Blackjack is black boer, based on the jack of spades, the card that is worth the most in many card games. Despite this, the normal Blackjack variant has no extra points for the jacks in the deck. In Blackjack Pro, however, this is the case. This game has a bonus game that you can play called Double Jacks.